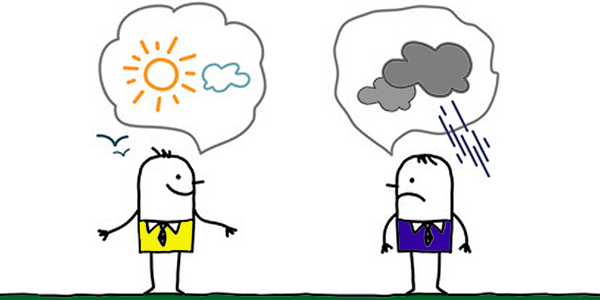 Is your glass half full or half empty? When managing your money and ensuring your financial security, both optimism and pessimism have key roles to play.

Does it matter if you’re an optimist or a pessimist? Optimism is generally considered far more desirable, and research has consistently correlated it to many positive outcomes, ranging from better health to more fulfilling relationships and even having more money. High achievers ranging from athletes to pop stars and business people are often heard to say that they succeeded simply because they ‘believed they could’ – they were optimists.

Pessimism, on the other hand, is often confused with defeatism: the belief that you will fail, which makes it more likely that you will. However, a closer look at both optimism and pessimism reveals that it’s nothing like so clear cut, and that there are plenty of disadvantages to always looking on the bright side, and lots to be gained by taking a gloomier perspective sometimes.

For instance, optimists often choose credit cards with a low annual fee and high APR, because they believe they will always pay off the balance in full. A pessimist might recognise that this won’t always be possible, and so choose the card with the higher fee and lower APR, and so save more money. Optimism is also associated with making unrealistic predictions. Newlywed couples are nearly always optimistic about the prospect of their marriage lasting forever – but the divorce rate of 42 per cent shows that love may indeed need new glasses.

Tali Sharot, a psychology professor of at UCL, has theorised that people tend to be optimistic when considering their own personal futures. This idea was borne out in the EU’s Eurobarometer surveys, where respondents tended to predict good job prospects for themselves in the future, even as they predicted that the overall economy would get worse.

In effect, optimistic people tend to confuse hope with prediction. By wanting something to happen, they increase their belief that it will happen, and vice versa (i.e. bad things won’t happen because they are undesirable). A pessimist, on the other hand, may do the opposite – or at least recognise that hoping for something doesn’t necessarily make it any more likely.

How optimism and pessimism affect your attitude to money

What role do optimism and pessimism play in financial planning? As a rule of thumb, one could say that ‘optimism invests, pessimism protects’. Investing your money is a generally optimistic thing to do, since you are trusting that the markets will deliver the growth you need to provide funds for the future. At the same time it shows realism, by admitting that you will need savings and can’t just rely on good fortune.

Savings and investments are an indispensable part of financial planning – one’s pension being the most obvious example. But in the shorter term, savings are unlikely to protect you against every eventuality. For example, if a serious illness or injury were to stop you working, it would take a huge amount of savings to support you for more than a few months.

This is where protection comes in – the ‘pessimistic’ side of financial planning. Cover such as critical illness or income protection insurance can provide you with either a lump sum or income if you become unable to work, while life insurance will help to provide for your dependents if you die.

Many people are reluctant to use this kind of planning. You might not feel like paying high premiums for something you hope you’ll never need. However, psychologists identify a useful type of pessimism known as ‘defensive pessimism’. This means that you consider the bad things that may happen to you, but then – instead of glumly accepting your fate – you take the necessary steps to deal with those risks. The defensive pessimist is good at separating what they hope will happen from what they know could happen. They accept that if hope alone were enough, no-one would ever get sick.

When it comes to preparing you for the worst that can happen, how does saving/investing compare to protection? Say you wanted to protect your income in the event of a serious illness that stopped you from working. We’ll suppose that you’re aged 30, that your present state of health is good, and that you want to receive income of £2,000 per month until your chosen retirement age (65). By shopping around, you could obtain a suitable policy for a monthly premium of around £45, or £540 per year.

But let’s suppose you’re an optimist! Instead of getting the policy, you pay that money into a savings account earning 2 per cent interest. Unfortunately, you then get a debilitating illness at the age of 50 and have to stop work. By this time you would have paid in £10,800 which with the interest would now be more like £13,200. From this nest egg you could draw £2,000 a month for about half a year – after which you’d need to find another source of income pretty quickly.

Stop. Rewind… Let’s say you were a pessimist instead. Rather than save up the money, you took out the income protection policy. You paid in the same £10,800 – but now the policy will pay out £2,000 a month for the next 15 years. Within six months you receive all your money back, and after seven you’ve made more than the savings account would have earned. Assuming you live to at least age 65, then in total that policy will end up paying you over £360,000 – a gain of some 3,000 per cent. In this scenario, the pessimist wins hands down.

It’s common practice for homebuyers with families to cover their mortgage with life insurance, so that their home isn’t repossessed in the event of their death. However, not everyone adds critical illness cover to their policy. If you don’t, then a serious accident or illness that stops you working could still result in you losing your home.

Adding critical illness cover to a life insurance policy doesn’t add a lot to the premiums, and can prove invaluable. Statistically one is more likely to have a critical illness (whether ultimately fatal or not) than to die suddenly with no warning.  Given the same assumptions made in the previous example, you could cover a mortgage of £190,000 for 20 years for around the same price – about £45 per month. How would that compare to a savings account?

If you paid £200 a month into savings earning 2 per cent interest, then in 10 years’ time you’d have around £26,000 – a lot, but still nowhere near enough to pay off the 10 years remaining on your mortgage. By contrast, your critical illness insurance policy would pay off the whole balance of your mortgage – even if you fell ill after paying only one month’s premium. On the other hand, if you never need the policy then in total you’d have paid out over £10,000 for no return – but this is the worst ‘best case’ scenario. Even supposing your critical illness stopped you working with just one year left on your £190,000 mortgage, the policy would still pay out more than you’d paid in total premiums over the 20 years.

How advice helps you find the right balance

Of course, the crucial difference with savings and investments is that you can access the money more easily, for any reason you want and sometimes whenever you want. Protection products, on the other hand, only pay out for specific reasons – that is, when you need them most. So this isn’t a case of ‘which is better’ – rather, it’s to show that a sound financial plan needs to include both kinds of thinking. You need the ‘optimistic’ saving and investing for the future you’ve planned – but you also need the ‘pessimistic’ protection products in place for when those plans don’t turn out quite as you hoped. An independent financial adviser can help you achieve the right balance.